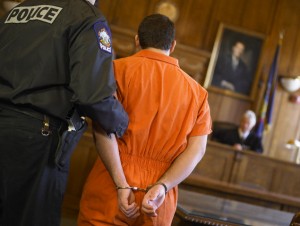 In criminal defense, a defendant is the person who has been accused of committing a crime. It is very important that anyone who is accused of committing a crime seek counsel immediately so that he or she can protect his or her constitutional rights in court. A criminal case should be taken very seriously, regardless of whether the alleged crime is a felony or a misdemeanor.  Convictions may result in court-imposed fines or jail time, and may become a part of the defendant’s criminal record permanently, which could have a long-term impact on a person’s ability to be hired, admitted to school, cleared for military service, or receive a professional license. In a criminal defense case, an experienced attorney will advise the accused of what defense is best for the case at hand.  There are several ways to defend a criminal case that must carefully be chosen and the potential outcomes acknowledged before proceeding with a criminal case.

The beginning of a criminal defense trial is called an arraignment.  At the arraignment, the defendant pleads either guilty or not guilty. If the defendant is claiming that he did not commit the alleged crime, he is presumed innocent, and the state must prove his guilt beyond a reasonable doubt. There are a few different ways to defend a criminal defendant.

“Innocent until proven guilty” is a line we have all heard on television or in movies, and it is a summary of the legal doctrine known as the presumption of innocence. The presumption of innocence requires that the State must prove the defendant is guilty, not that they must prove himself to be innocent.  If the State  cannot prove them guilty, the defendant cannot be convicted.

During a criminal trial, the defendant has the right to cross-examine witnesses.  This means that the defendant can test the honesty, truthfulness, memory, or motive of anyone accusing him of committing a crime.  This is a powerful tool used by defense attorneys, because a jury must believe the defendant’s accusers beyond a reasonable doubt.  If the past actions or intent of the witness leads a jury to disbelieve the witness, the defendant may not be convicted based on that witness’s testimony.

Another way to defend a criminal defendant is by an excuse.  An excuse is a reason a person committed a crime that makes that person not culpable in the same way another person may be for committing the same crime.  An example of an excuse is an insanity defense.  Claiming that the defendant was not capable of controlling his actions at the time of a crime is an example of an insanity defense.  Usually, a defendant must plead not guilty by reason of insanity at arraignment, and he must prove his insanity by clear and convincing evidence.  In the case that the defendant is found to be mentally ill or handicapped, the defendant will receive treatment for his disorder rather than prison time.

In criminal defense cases, a defendant may also claim a partial defense by claiming he was under the influence when the crime was committed.  Intoxication could refer to drugs alcohol, or other substances. While intoxication does not completely excuse the defendant’s actions, in some cases, it may lessen the charges.

A defendant may also raise the defense of entrapment. Entrapment is when the government, in some way, induces a defendant to engage in criminal behavior.  This usually arises when an undercover officer compels the defendant to commit a crime that he otherwise would not have committed, but for the officer’s influence. A government official cannot compel an individual to engage in criminal activity.  Doing so will result in the release of the defendant and the officer in question will be charged.

Criminal defense is not always as simple as choosing one of the options above. It is often necessary to combine several of these defenses to successfully argue for someone who has been convicted of a crime. It is important to ensure that all of the evidence is carefully examined, the defendant’s defense is strong, and any witnesses who may be called to testify are well prepared for the questions they will be asked by the prosecutor.